An epic farewell to Afghanistan- three days of motorcycle (and van) chakaring through the Central Highlands– Bamyan, Daykundi, and Ghor provinces.  This is an area basically inaccessible to the rest of the country, except on a network of donkey paths and precarious mountain roads.  Here is my account:

You would never look at this and say “yes. This is a road.” And yet somehow, on we plow, on narrow dusty paths hugging mountains and cliffs, over rocky, hoof-trodden scrabble, through deep streams that soak us to our knees and send steam boiling off the engine. Sometimes I have to get off and walk, as the way is too precarious for two on the motorcycle.

In some places the road simply disappears into ravines of dried mud as deep as I am tall. The occasional vehicle lumbers past- zippy Pamir motorcycles, the odd dusty Corolla with California or Maryland license plates, ancient Russian 10 wheeled Kamaz trucks, and 25 year old Town Aces, heavy laden with passengers and goats, roofs piled high with clothes and potatoes and plastic jugs.  Lurching and teetering like a very slow roller coaster, I am simultaneously awash with fear and acceptance as we round impossible blind curves at 30 degree downhill angles over mountain streams that crisscross the road. Thankfully we see no carcasses of burned out vehicles on the slopes and valleys below us, so acceptance wins. 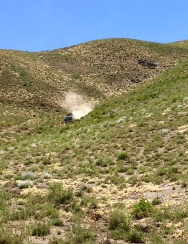 Life pours out of the mountain streams- shocking valleys, crowded with lush, thick grass, slender trees, wheat and potatoes- snaking through towering mountains and soaring cliffs. Girls adorned in a rainbow of chadors wash dishes, and lay bright clothes out to dry on the stream banks and hay bales nearby. Delicate flowers with sharp leaves defy the altitude and mountain rock with life; purple and pink hug the ground, while yellow and white blossoms perfume the wind on slender stems, reaching even further into the sky. Something resembling Baby’s Breath tower to the size of small trees.  Hills roll over the high plateau around 3,000 meters. Ruins dot the plains- crumbling mud houses resembling deserted Narnian castles. What ancient civilization used to be here? One that has not changed in a thousand years- sheep and goats rest in the shade of the ancient remnants, while villagers carry on life inside the earthen walls of handpacked mud houses just beside. 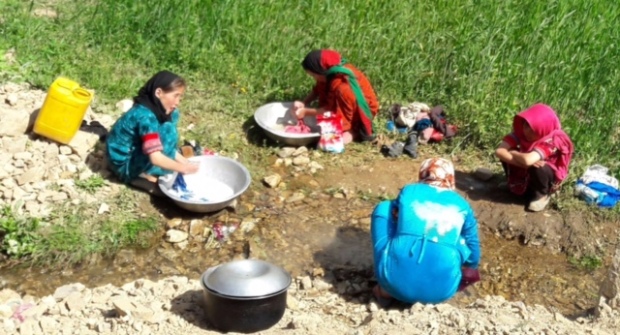 ruins on the high plain

Tattered flags whip and wave atop the roadside rock pile graves of mountaintop martyrs. Herds of sheep and goats cause intermittent traffic jams at 3400 meters, while the winds blow ancient dust across the Hindu Kush.

The road condition is something like driving on crushed up chalk. Dust splashes like water when the front wheel hits deep ruts. The way, already challenging, becomes treacherous and the beautiful scenery gives way to full focus on keeping the bike upright. Intense praying. The wheels spin out and we go sideways– I can hear Alex saying “no no no no no,” and then “honey are you ok? Are you ok, talk to me!” The bike is on top of me, but our limbs are intact and our heads are still attached. I have broken my feet enough times to know something was wrong with my right ankle, but I cannot yet quite determine just what. All I know is that I do not want to let go of it, and visions of Kabul airport in a wheelchair and cast for a third time flash before my eyes. Although we are both banged up, the chalky dust road ends up being our salvation. Had we been on the hard scrabble, our cuts and bruises surely would have been broken bones and road rash. God is good!

Inshallah we crash only about 100 meters after a small enclave. The men and several children amble out to stare and assist- a young child comes and brushes the dust from my back with a bundle of fragrant leaves, and one of the men helps carry me to a solid embankment while Alex tends to my rapidly swelling foot and bleeding ankle. His own trousers are torn and bloodied- he has ripped a dime sized hole in his right knee, gashed his waist, and a huge blue bruise is forming on his thigh. The villagers assume we are doctors- why else would we be traveling in such a remote area with such an extensive first aid kit?   The village men pour water on our wounds and retrieve mirrors and broken indicators that are scattered on the road. They insist we come with them to the village for chai, but shamefully, we are too shaken and in need of our final destination to accept. A mere 10 kilometers can equal several hours on this road. I will never stop regretting that we declined this invitation.

Gingerly, we limp back to the bike, and continue on. We still have at least another 1.5-2 hours til Bandar, where we are supposed to spend the night, and we can’t afford to linger any more. To our chagrin, the road does not improve- miles of shifty sand, barely lodged on the side of steep cliffs, sharp dips and steep inclines keep our hearts in our throats and legs firmly clamped against the bike. The road rises and falls endlessly before us, an infinite ribbon winding through the endless mountains, until Alex says the fateful words “I don’t think we are in the right place.” As it turns out, his colleague had input the wrong coordinates into the GPS device, and we are headed for Sangitakht, the centre of a district of the same name in Daykundi, instead Bandar, in the west. In between us is an expanse of 50 km of rough road- at least another three hour drive. Fortunately, Alex remembers from a previous trip to the field that there should be a small inn in the Sangitakht main bazaar. Alex’s constant level-headedness and prepared-for-anything attitude, combined with my love of the unexpected and easily delighted spirit transform what could have been a grave disaster- being lost, injured, and alone in provincial Afghanistan- into a delightful experience of God’s grace and Afghan hospitality. We pull in, exhausted, and are warmly welcomed as old friends by the proprietor, a smiling gentleman named Khalid. Our room is spare, but clean enough, and the toilets… exist.   Khalid prepares the most delicious meal of naan and shorba, and a plate of fresh spring onions. Khaarajia are a rarity in Sangitakht, and we are visited by the local police to make sure we are ok, and that we have enough chai to warm the spirits of a whole village.

After a responsible adult discussion, we decide that, given the fact that Alex’s braking leg is a bit messed up, and I can’t walk, the responsible course of action would be to hire a van back to Yawkalang, where the road to Bamyan is paved.   The next day, in an ancient Toyota Town Ace van, we realize just how ridiculous the roads were. Clouds of dust keep our windows closed and scarves wrapped around our faces. The motorcycle, strapped into the back and wedged with bald tires, looms menacingly over my head as we lurch over the mountains at miraculous angles. We are tottering along a high ledge, with barely enough room for two people to walk abreast- our driver is a magician for keeping the van on this “road!” A lone woman appears out of nowhere, staggering along the ledge; she heaves herself against the side of our van, crying for a ride. The driver waves her away, but how can we let her continue by herself? A few meters later we pull her into the dusty van and continue on. She has walked all the way from Ashtarlai, a remote district at least 60 kilometers away. She is on her way to Bamyan, another 100 kilometers! I don’t think the driver is super happy about this, but what else can we do but take her? It’s Eid, after all. Khushit is curious about the motorcycle, and very confused about me, a strangely dressed Hazara girl traveling with a foreign man in a bandana and Indiana Jones hat. I try speaking with her, but her Dari is garbled. Driver says she is speaking partly Urdu. She says she has a son in Bamyan, and either she or he is sick. I can’t quite understand. When we stop in Yakawlang and unload the bike, she disappears into thin air. 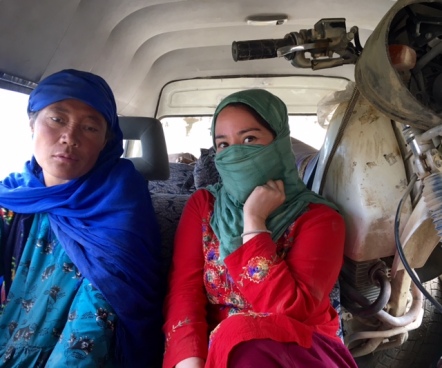 Khushit, me, and the motorcycle

The overwhelming enormity of the mountains moves me to tears. Over and over, I thank God for this amazing country and for giving me two eyes with which to see it. I honestly do not know what I have done to deserve such a special experience, such a rich life, but I know that Afghanistan will be with me forever; these mountains are etched on my heart, the dust is in my bones, the streams flow through my veins. This is a place where earth meets sky, and you can only imagine that God created the land here to share with angels and ancient creatures.   I want to do as Rumi said, “Let me sit here, on the threshold of two worlds. Lost in the eloquence of silence.” 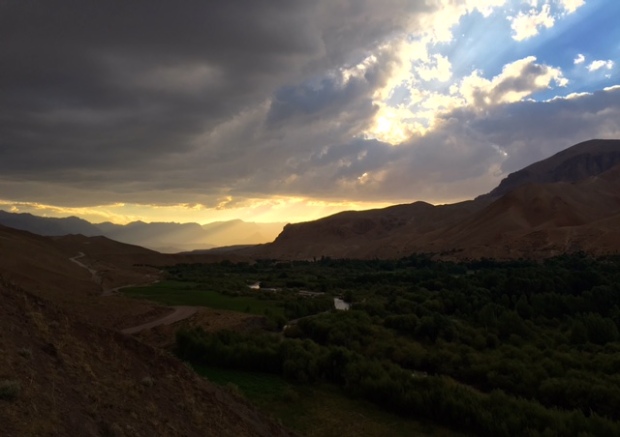 sunset over Yakawlang Valley and the winding road